In March of 2021, Mayor Sheehan unveiled historic fair housing legislation that will empower the City’s Buildings & 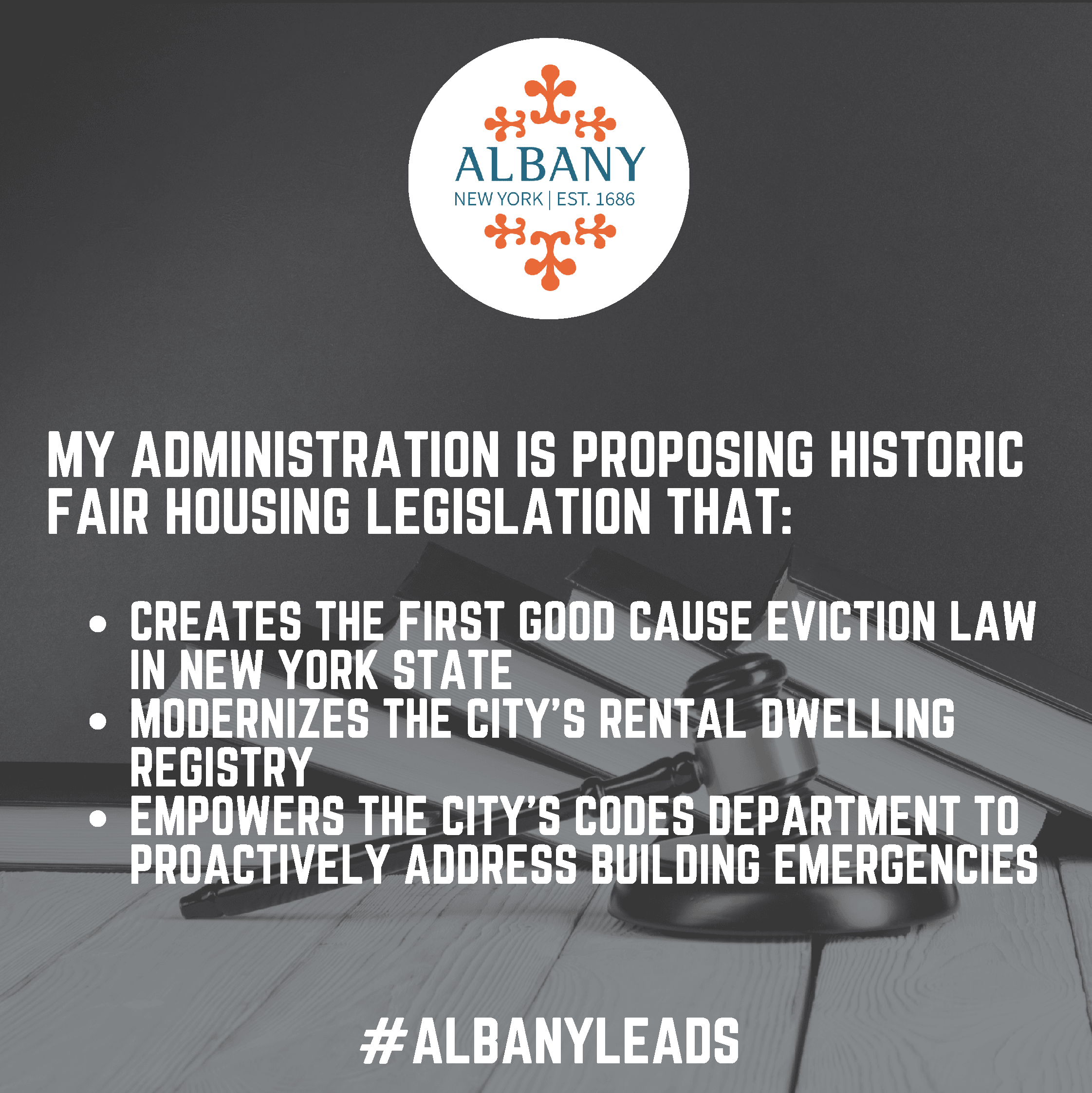 This comprehensive legislation will create transformative fair housing rules designed to further stabilize City neighborhoods by ensuring landlords, tenants, and the City have the tools needed to provide secure and quality housing in Albany. This legislation has become even more timely as the housing crisis created by the COVID-19 pandemic becomes more widespread.

Four local laws – F, G, H, and I of 2021 – are sponsored by Councilmembers Balarin, Conti, Anane, and Fahey, respectively, and have been introduced to the Albany Common Council for further deliberation and consideration. View legislation via the links below.

The legislation is designed to:

Empower the City of Albany Department of Buildings and Regulatory Compliance to take more aggressive action to repair easily-fixed items rather than declare a building unsafe and unfit (thereby forcing the displacement of residents) and bill the owner for the cost of the repair.

Create a fee to be charged to the owners of buildings which have been declared unsafe and unfit by the City of Albany Department of Buildings and Regulatory Compliance to cover the cost of responding to and addressing unsafe and unfit buildings.

ROPs will have to be renewed every two years, as opposed to the two-and-a-half years required now.

Allow an ROP to be revoked for willful failure to correct serious code violations.

Implement a Good Cause Eviction Law

Build upon a framework already in place in eviction proceedings by codifying common sense grounds for eviction, including: (1) failure to pay rent; (2) substantive lease violation; (3) unreasonable refusal to allow the landlord access to the premises; (4) illegal use of a unit in violation of an order; (5) nuisance, criminal activity, or illegal activity; or a landlord’s (6) recovery of the premises, subject to conditions; (7) entry into an enforceable, arms-length contract for sale of the property; or (8) receipt of tenant’s prior consent to vacate the premises.

This legislation was drafted by the City of Albany’s Cities RISE team – a group of officials from the Departments of Buildings and Regulatory Compliance, Corporation Counsel, Administrative Services, Planning and Development, and Community Development Agency – who spent more than a year surveying landlords and tenants, holding targeted community discussions, completing extensive research into what other municipalities across the state and nation are doing to combat the housing crisis, and working with various Common Council Members to fine-tune these proposals. The City of Albany Cities RISE program is supported by a $1 million grant from New York State Attorney General Letitia James.